With 2017 being the 50th anniversary of the Summer of Love, there’s never been a better time to visit San Francisco. Whether you’re there on business or travelling for pleasure, San Francisco has something for everyone.

Here’s our favourite things to do and see in San Francisco.

Get in the love bug and see the sites.

If you’re visiting on a tight schedule there’s only one man to ring, Allan. Founder of SF Love Tours, he’ll load you up in his VW camper van and in two hours show you the greatest sites of the city.

Leaving from Fisherman’s Wharf Allan will fill you in on the history to a soundtrack of San Francisco. From it’s history as the original Sin City to the Castro District and Lombard Street. He’ll make you laugh, he’ll make people in the street laugh and you’ll no doubt get talking to the locals on this jam packed tour. 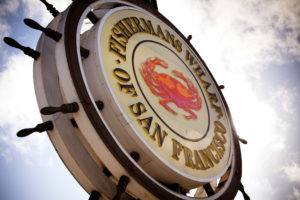 Not only the starting point for the Love SF tour, it’s home to the SF seals and provides a great view of Alcatraz and the Golden Gate.

If you have time grab a cup of coffee at Boudin Bakery, grab a window seat and watch the fog roll in over the bay before heading to pier 39, where you’ll find boutique shops and souvenirs.

Jump on a cable car 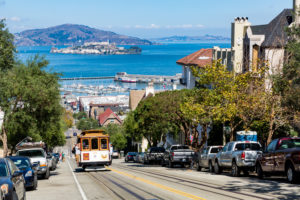 You can’t head to San Francisco and not ride the cable cars, with routes across the city and up to the main shopping and business district the cable cars are a great way to get around. We jumped on at Fishermans Wharf and got off at Union Sq, the ride lasted about twenty minutes and afforded us some great views of the city from the tops of the hills. 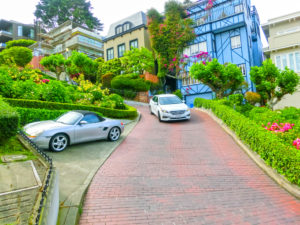 Everyone knows that San Francisco is hilly. Within the city there are seven hills, and back in the day cars couldn’t deal with the gradient of the roads. As a result roads like Lombard Street were built to deal with the issue, allowing cars to turn, much like skiers! With streets are like this you’re glad that most of the cars in the US are automatics! 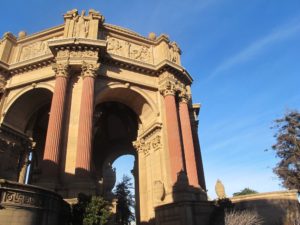 If you’re a film buff you might recognise this tourist spot from film ‘The Rock‘. Popular for wedding photos, this amazing structure was originally built to host the 1915 Panama-Pacific Expo. A relatively quiet spot in the Marina District of SF where you can grab a picnic or watch the world go by.

Get your walking shoes on for the Lyon Street steps

A lesser known site in SF, if you make it up the steps you’ll be rewarded with one of the most beautiful views of the city. It’s no coincidence that this is one of the wealthiest areas of San Francisco! 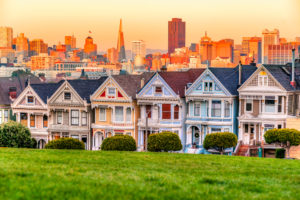 Children of the 90’s might recognise this as the home of The Full House! Another widely used façade used in films and instantly recognisable. You’ll find these lovely ladies on pictures and postcards all around the city. 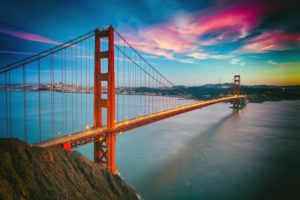 Arguably the most famous landmark in San Francisco, the Golden Gate Bridge was opened in 1937. Open to the public you can walk or cycle the 1.7 miles between the headlands.

Whilst it may be the anniversary of the Summer of Love, San Francisco has something for everyone. If you’re travelling to, or through this great city make sure you make the most of it and check it out!

Flights to Oakland California from London Gatwick start from £179 with Norwegian Air.