41 per cent of millennials travel three to four hours per week and want WiFi wherever they go.

Across all age groups, three to four hours is the average amount of time business travellers spend on trips for business each week.  But, again, it is the millennials that represent the highest proportion at 41 per cent, compared to 27 per cent of 34 to 44 year olds and 18 per cent of 45 to 54 year olds.

Average time spent travelling for business per week (outside of their usual commute): 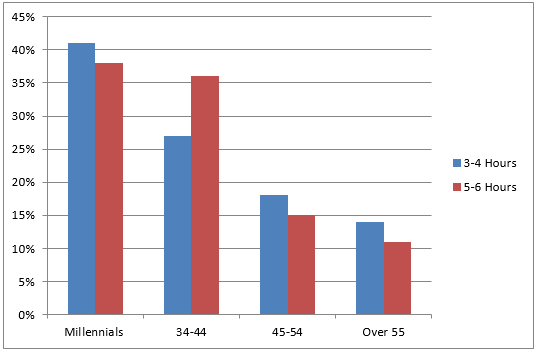 According to the study, it seems that business travel is emerging as a lifestyle for millennials, with almost a quarter combining business with leisure for a ‘bleisure’ trip.  It could be argued that technological advances that help save time allow business travellers to be more efficient in creating extra recreation time while away from home.

The survey also revealed that free WiFi is the new ‘breakfast included’ with 82 per cent of tech savvy millennials putting access to WiFi or ‘staying connected’ as their top priority when travelling for business. Free breakfast came second, followed by free parking, perhaps highlighting a shift in expectations.

With the ‘bleisure’ trip on the rise it’s unsurprising that millennials rate loyalty programmes as their top benefit of business travel. In contrast, travellers aged 35 to over 55 consider access to exclusive deals and discounts as the top perk. Interestingly, business travellers aged over 45 also prefer travel-related benefits, such as upgrades, more than the younger travellers.

Gary Smith, Managing Director, Europcar UK Group commented: “According to our research, it seems that today’s business travellers are spontaneous, with over a third making their own arrangements just one day before they travel and almost half leaving plans to a week before they travel. However, this could mean they miss out on the most competitive deals.

“And, despite the emergence of new technologies such as video conferencing and facetime, there still seems to be an appetite for face to face meetings. Overall, 38 per cent of the business travellers we surveyed valued the opportunity to meet clients and suppliers in person.

“It’s also interesting to see a growing generation gap, with the tech savvy millennials much more likely to see WiFi as a top travel priority. This age group is also more likely to tag leisure holidays onto business trips, increasing the trend of ‘bleisure’.

“Business travel companies need to look at enhancing their offerings beyond traditional products and services, responding to more flexible working patterns and the trend towards leisure add-ons.  The successful brands will be those that serve independent business travellers and meet their needs as they blur the lines between business and pleasure.”